Hey guys! So I meant to write this review weeks ago but Vinnie still refuses to nap for longer than 30 minutes (unless he is held) so here it…a little later than I had hoped. If you have been following me for a while you will know that I purchased my Bugaboo Buffalo back in 2016 when I had Myla and was pretty happy with it. I hadn’t considered upgrading to a twin pram as I figured I’d just get the wheeled board attachment for Myla or chuck Vinnie in the carrier. Well, I was lucky enough to be gifted a Redsbaby Jive2 Platinum Pram prior to Vinnie’s arrival and I’m so damn glad I was! I didn’t realise how convenient a double pram would be…until I started using one!

Redsbaby was founded by an Australian couple, who found that most stylish prams on the market were made to suit a European lifestyle…they sought to change that. They made a pram that is compact, lightweight and to suit the hot and humid Aussie climate. After previously owning a Bugaboo Buffalo I completely understand where they were coming from.

When I was in search of my first pram style was definitely at the top of my list followed by practicality. I went with the Buffalo due to its hold capacity and because I thought it looked cute AF. After using it I can confirm that it really is a pram made to suit a cooler climate.

She’s got the look…

I honestly assumed that in order to have a practical pram, I would have to sacrifice style. Not with my Redsbaby! I went with the Glacier finish which is a light grey quilted fabric paired with a gunmetal grey chassis and black leatherette handlebars. The fabric is waterproof and stain resistant. I was pretty shocked that the leatherette handlebars were a standard feature as my Bugaboo came with foam handlebars, with me having to purchase leather covers from a separate retailer.

Yes, it’s cute…but is it practical?

YES! The tandem option on its own should be enough to sell you! When I first started using my Jive2 Vinnie was in the bassinet and Myla in the bottom seat.  The bassinet has a 9 kilogram weight capacity therefore it can be used for quite some time however, Vinnie recently made the switch to the seat (I just lay it flat). Once Vinnie grew out of the sleepy newborn stage he disliked the bassinet as he was unable to see everything and everyone. I wasn’t too fussed as the Reds team and other mamas assured me that as long as it was in the flat position it would be fine. I also gained extra boot space since I made the switch so win-win.

With my Jive2 there is no need to purchase a separate ‘breezy hood’ like I had to with my Bugaboo. There are vents built into the bassinet and canopy hood that can be opened/closed depending on the weather. The canopy hood is also expandable and big enough to keep the sun and light out of little babes eyes. 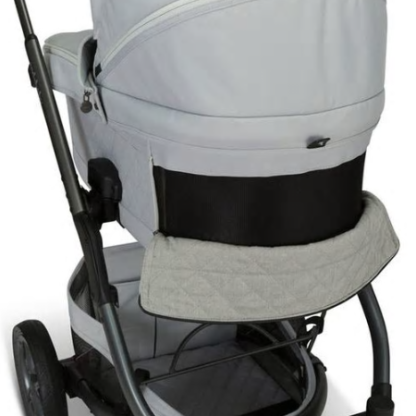 The main seat can hold up to 20kg, the secondary up to 17kg, and the shopping basket up to 12kg. To put it into perspective Myla currently weighs 13kg at 2 years and 4 months old therefore she still has plenty of room to grow! I personally prefer a basket that can hold quite a lot as even when I don’t mean to, I always end up buying groceries (and clothes) to pop underneath. There is also some extra storage behind the main seat. A place to pop a water bottle and snacks for your mini or you. Love that they have utilised every opportunity for storage!

Do they have accessories?

Of course. So far I purchased the matching pram organiser which is perfect for my wallet, nappy, wipes, car keys, dummy and phone. There are many accessories available on their website but some of my favourites (and upcoming purchases) would be the drink holder and buggy board. I’m very keen on getting the buggy board for those days when I use it in single mode because Myla doesn’t want to sit!

There really is only two things I wish I could change about the Jive2. I found the bassinet buttons when opening and closing the hood quite hard to use (but I could be a weakling). I also wish that the leatherette handlebars could be changed. I would love a brown leather handlebar for a new look…but really, if bassinet buttons and the handlebar colour is all I can complain about, clearly I’m digging deep for a con! I will mention that I did have some feedback from other mums in regards to the cup holder. They mentioned that it was a bit narrow for their coffee cup/water bottles, I cant confirm this as I am yet to purchase it, but thought it was worth noting.

So how much is it?

The Redsbaby brand have a range of prams available starting from $649.00. My pram, the Jive2 Platinum costs $949.00 for the single option and $1.149.00 for tandem. The tandem comes complete with the bassinet and two seats and is available in a Mulberry finish too (a dark red). At the moment they have a limited edition Carbon (all black) on special for $749.00 (single) or $899.00 (tandem) which is an absolute bargain!

Would I recommend this pram?

Well if it isn’t already obvious enough, YES! I love, love, love my Jive2. Practical, stylish and will be handy to have when baby number 3 comes in the future. If you are still sceptical, do a google search online and see other mums reviews…4.8/5 stars is pretty friggen awesome. Especially considering Redsbaby has only been around since 2014.

They recently came out with the Redsbaby Skip (a stroller pictured below). It weighs 6.5kg total and has a super compact fold with a carry strap. making it the perfect travel stroller. It will set you back $399.00. It’s a good option if you don’t need a tandem and a basket capacity over 5kg. I really, really want one haha.

Shop the Redsbaby range here, and find them on Instagram.